In principle, Buried Stars allows the publication of videos and screenshots captured in the game.
However, the following policy restrictions have been put in place to allow more people to enjoy playing Buried Stars, so please abide by them.

After reaching a specific point in the latter half of the main route of Buried Stars, the information on the following screen will be displayed. 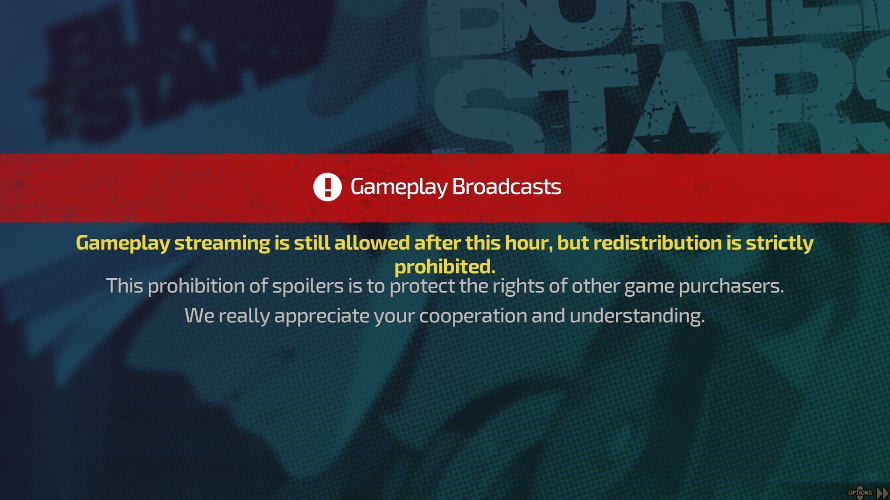 Up until this information is displayed, the publication of in-game videos and screenshots are permitted without restriction.
After this information is displayed, the following restrictions apply for the remainder of the game, including the ending credits and until the player returns to the Title Menu (this area will be referred to as the "Restricted Section").

Screenshots of the restricted sections are allowed to be published freely under the premise that maximum discretion is taken to prevent ruining the game for others by adding spoiler warnings, etc.
That being said, each of the following actions is prohibited regarding relevant screenshots:

Regardless of their relation to the restricted section, please refrain from publishing videos and screenshots in the following cases, as they will be considered unauthorized duplications of the game:

Regarding videos or screenshots of Buried Stars in violation of the above policies, copyright holder LINE Games may request the deletion of such videos and screenshots.

Additionally, if you have become interested in Buried Stars by watching videos or looking at screenshots, it would be greatly appreciated if you considered purchasing it.

We ask for your understanding and cooperation so that more people can enjoy Buried Stars.